Side effects of brand equity

THine Electronics is very much perceived as a semiconductor manufacturer that provides the digital interface V-by-One® HS, for LCD TVs. There is nothing wrong with that establishment of the corporate image.

An electronics manufacturer developing LCD TVs surely thinks of the corporate name THine or the brand name V-by-One® HS whenever they consider which interface to use to connect the timing controller IC (T-CON) with the video processing board. On the other hand, there is a disadvantage as well; the perception may prevail that V-by-One® HS is exclusive to LCD TVs. As such, the corporate name, THine, may be missing from the list of sourcing options for equipment used for high-speed serial transmissions between the Box or PCB for communications.

The first target was the LCD TV market

In fact, V-by-One® HS has been used for a variety of applications besides the internal interface of LCD TVs (Figure 1).  Figure 1 shows a case where the product is used as a high-speed general-purpose serial interface that communicates data from point A to point B.

First of all THine Electronics focused on the high resolution LCD and released V-by-One® HS family with high-speed serial interfaces for the application. Then these were also employed to other markets.

What is also important that the data rate of the digital interface for LCD TV. With rapid enhancement of the image quality, there has been a sharply growing demand in increasing of the data rate. Specifically, there is simultaneous growth in resolution, high frame rate (HFR), and in high dynamic range (HDR). This situation has resulted in very high demand for higher data rate. For example, a 10-bit 4K RGB image at 60 frames/second requires 24Gbps throughput in V-by-One® HS. This high-speed interface has been achieved by V-by-One® HS with 3Gbps x 8 lanes. However, users are not satisfied with 60 frames/second. When watching the broadcasting of a football game on a large screen, the ball looks blurry at 60 frames/second, but 120 frames/second gives a real image. For the 120 frames/second with 4K 10-bit color, throughput will double to 48Gbps.

This fact means that THine Electronics has the technology of the general purpose high speed interface up to 16Gbps with multi lanes already. This high speed technology will apply to interfaces for high rate data transmission between point A and point B as well as to the digital interfaces LCD TV.

What physical layer technology is used for V-by-One® US to achieve the high data rate? Basically, the multiple signal conditioning technique are applied, which is commonly used for SerDes and re-timer IC (CDR) for data communication applications for 10 to 32Gbps.

FFE (Feed-Forward Equalizer) is used for a transmitter, and DFE (Decision Feedback Equalizer) and CTLE (Continuous Time Linear Equalizer) are used for the receiver (Figure 3).

Here is a brief description of each technologies. The built-in FFE in a transmitter is a technology having multi-tap de-emphasis and pre-emphasis functions which enables more flexible waveform adjustment. Specifically, the FFE provides a tap consisting of multiple delay blocks and adds up signals amplified or attenuated at a given ratio in the individual delay blocks and then outputs the added value (Figure 4).

This allows expected transmission waveform to be created for the (pre- and de-) emphasis and pre-shooting of the waveform for a receiver which requires a clean Eye.

The CTLE (Continuous Time Linear Equalizer) in a receiver is an analog technology which amplifies and compensates high frequency insertion loss for transmission line (Figure 5). This means that it functions as a high-pass filter and amplifier.

The other technology for a receiver, DFE (Decision Feedback Equalizer), reduces the ISI (Inter Symbol Interference) jitter of received signals. As like FFE, DFE consists of multiple taps. The DFE determines the tap coefficient for each 1 UI so that the error between a received waveform and an ideal waveform can be minimized and then gives feedback for the received signal waveform (Figure 6). This behavior reduces jitter and returns the signal waveform with a clean Eye opening.

The role sharing of the CTLE and DFE for signal waveforms with completely closed Eye is as follows: first, the CTLE is applied to open Eye roughly, and then the DFE reduce jitter more for clean Eye.

In addition, THine Electronics has not only developed the chip for V-by-One® US but has also been collaborating with FFC/connector manufacturers to develop a flexible flat cable (FFC) and connector for the transmission line of a high speed digital interface. THine achieved the high-speed inter-connect technology for the high-speed media with 16Gbps x 16 lanes by a long-reach FFC up to 1m.

This broadband low-loss FFC optimizes its materials and structure. Materials having small dielectric loss tangent (tanδ) and dielectric constant (εr) are used to reduce propagation loss. In addition, an optimized layout minimizes the transmission media loss, reflection loss, and cross-talk (Figure 7). While keeping the current structure of the FFC receptacle connector, an impedance is adjusted by improving the structure and metal part of the solder connection of connector pins and wiring on a substrate and/or by changing the wiring length in order to reduce signal reflection. 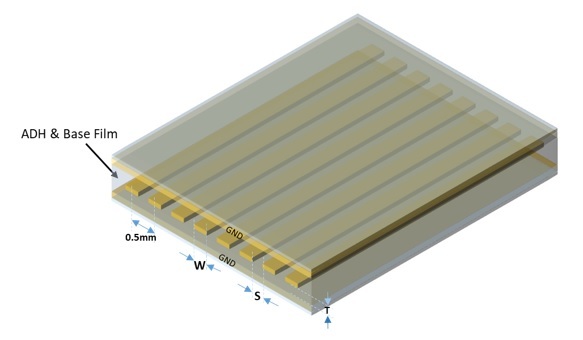 There will be some issues for high speed 16Gbps x 16 lanes interface. It is a signal path of  V-by-One® US chip, a printed circuit board line, and connectors. Because this is the work to be done by users. THine Electronic says, “PCB art-work should be carefully made because the materials and layer structure of a print circuit board significant affect the electric characteristics, and it is important to manage the impedance control at the connecting point with each components.”

The development of next-generation

By releasing the high-speed products, the company shows to have the advanced technology and brand equity.