Many applications leverage V-by-One® HS for high-speed data transmission due to its high data rate (4 Gbps) and high robustness.

The 8B/10B coding technology was originally developed in the 1980s and then later developed as “InfiniBand” in the 1990s for high performance computing (HPC), the Common Public Radio Interface (CPRI), and the Open Base Station Architecture Initiative (OBSAI) optical interface for communication infrastructure, which accepts no error (Fig. 1).

In 8B/10B coding, 8-bit input data are divided into 3 upper bits and 5 lower bits. The 3 bits are converted into 4 bits (3B/4B coding), while the 5 bits are converted into 6 bits (5B/6B coding). The data is converted into a symbol according to a predetermined conversion table. Two types of code (plus and minus) are prepared for each symbol, called “RD +/- (Running Disparity)” in the 8B/10B code table. If the previous running disparity is positive, a minus symbol is output, and if negative a plus symbol is output. The conversion table defines the maximum length of the same value (0 or 1) as 5 consecutive bits or more to prevent unbalanced signal coding. The difference between the number of 0’s and 1’s is always guaranteed to be within ±1, which can secure almost complete DC balance.

One of the main applications of V-by-One® HS is in automotive equipment (car cameras). Thanks to its very fast transmission data rate of 4 Gbps, V-by-One® HS can transmit high-resolution data as well as images taken by multiple cameras via one cable (Fig. 2). This reduces both cost and vehicle weight, while enhancing robustness.

Medical equipment, amusement equipment, and multifunctional printers also leverage V-by-One® HS as an interface for image/video signal transmission, especially transmission between two PCBs, an image sensor, and a controller or a PCB and LCD panel. V-by-One® HS provides positive effects in terms of higher resolution and faster frame rate, as well as a shorter cable length and smaller cable diameter.

Here is a specific example. Upon bridging an image sensor to a control board by V-by-One® HS, data can be transmitted even via copper cables 0.32 mm (AWG28) or 0.25 mm (AWG30) in diameter. Only V-by-One® HS enables the use of such thin cables several meters in length to transmit data. Thinner cables are flexible and easy for users to handle in a narrow space.

The data sheet of the SerDes chip supporting V-by-One® HS defines the names of such signals as DE (Data Enable), Hsync (Horizontal Synchronization), and Vsync (Vertical Synchronization), which control the transmission timing of image/video data. Therefore, some engineers may mistakenly think that V-by-One® HS is an interface dedicated to image/video data. Actually, V-by-One® HS is a common SerDes product with 8B/10B coding and widely suited for any type of data communication.

First, the Hsync and Vsync signals need not be used, as a device will only work with the DE signal used to insert K code (K28.5), which is one of the K codes and indicates the boundary of 10-bit signals. Again, just using DE as a control signal by inserting K28.5 is required for using V-by-One® HS as a general SerDes chip for data communication such as bus and data. V-by-One® HS is a “universal SerDes chip of up to 4-Gbps speed that adopts the 8B/10B coding method.”

V-by-One® HS PHY is similar to PCI Express Gen 2, which is also a clock-embedded technology using 8B/10B coding. The difference is that PCI Express Gen2 has a higher data transmission rate (5 Gbps) than that of V-by-One® HS (4Gbps) and must comply with the upper protocol layer.

Therefore, V-by-One® HS is more flexible than PCI Express when used as a high speed interface for general data communication. In addition, V-by-One® HS requires no handshaking processing and has no overhead. Furthermore, it can freely implement higher layer protocols as required. 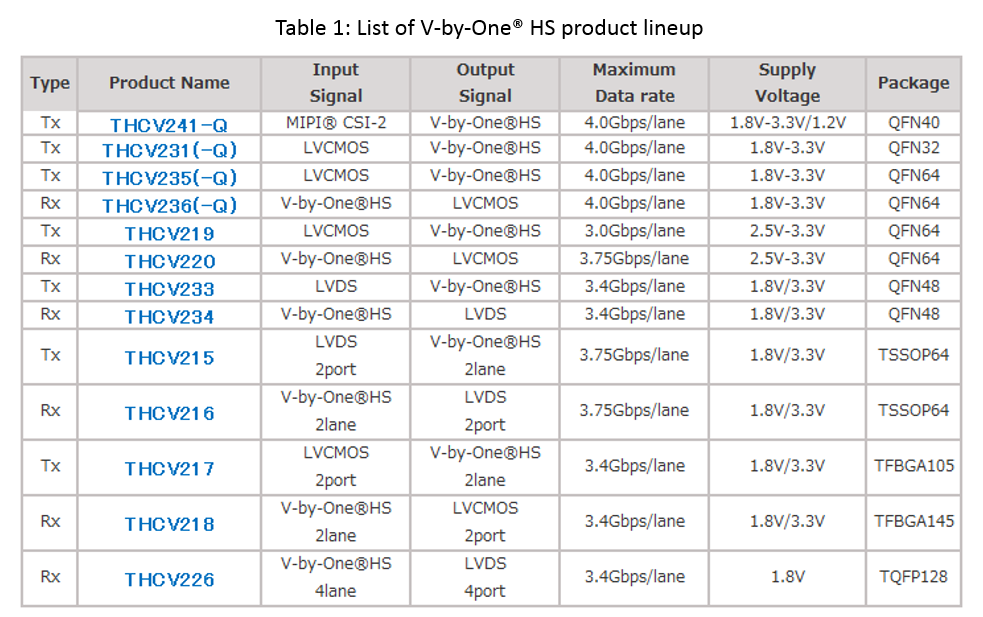 THCV231 and THCV235 are transmitter ICs with the maximum data transmission rate per lane corresponding to the LVCMOS input signal of 4 Gbps (left side in Fig. 3). The clock frequency corresponds to a wide range from 24 M to 160 MHz. The interface of V-by-One® HS is basically one lane, though some products have multiple lanes, depending on the device. Users can select the interface according to the bandwidth required.

THCV231 and THCV235 differ in terms of their package. THCV231 is sealed in a 32-pin QFN, while THCV235 is placed in a 64-pin QFN. THCV231 was designed to be compatible with any electronic device requiring a small package. THCV236 is the receiver corresponding to these transmitters with the 64-pin QFN package (right side in Fig. 3), and outputs the LVCMOS signal. 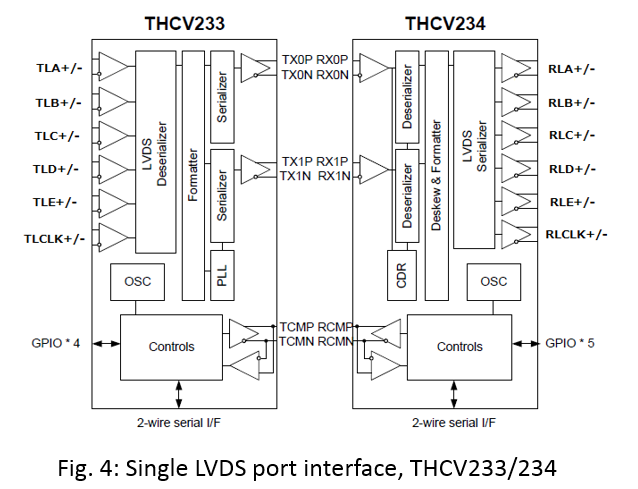 THCV215 and THCV216 are a transmitter IC and a receiver IC with two LVDS and two V-by-One® HS ports, respectively. The maximum data transmission rate is 3.75 Gbps per lane (Fig. 5). 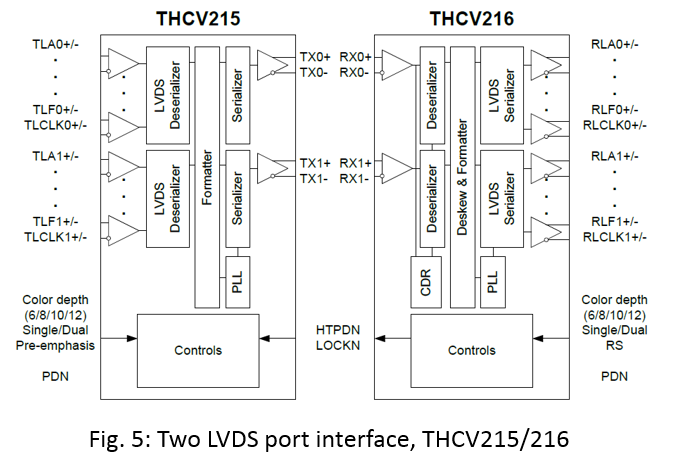 THCV226 is a receiver IC compatible with 4-port LVDS. Although THine does not offer a 4-port compatible transmitter IC with four output lanes, users can design transmission using four lanes by employing two serial output ICs, THCV215 or THCV217 (2-port output transmitter IC), or by integrating the transmitter circuits in ASIC. THCV226 covers a very wide bandwidth due to the four lanes and its maximum data transmission rate is 3.4 Gbps, in total, reaching 13.6 Gbps (active bandwidth at 10.88 Gbps). 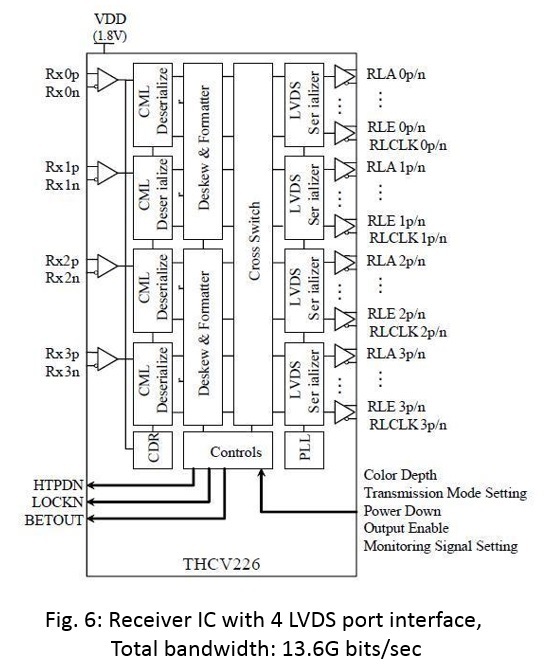 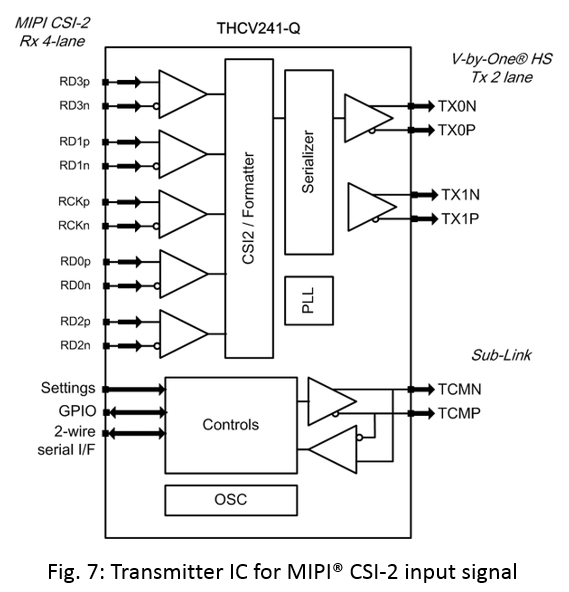 The number of pixels actually becomes larger and the frame speed becomes much faster in many applications such as automotive cameras, surveillance cameras, and machine vision. Therefore, V-by-One® HS is not only for LCD-TVs, but will play a major role in a wide market.
*“MIPI®” is a registered trademark of MIPI Alliance, Inc.